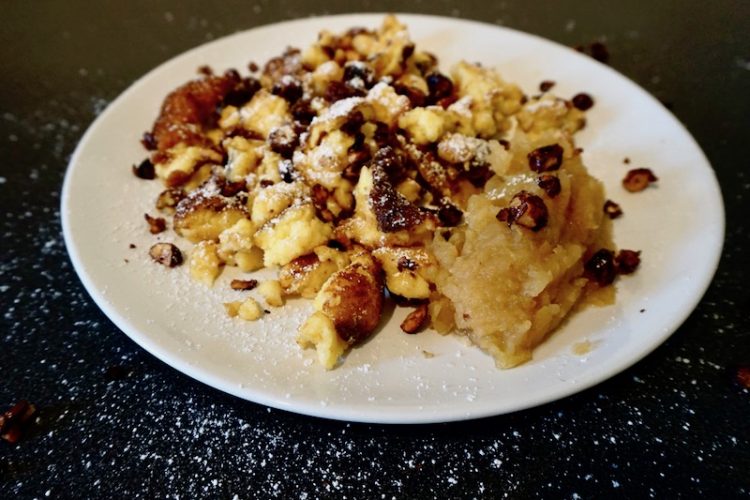 Each time, when I went skiing with my family in the mountains, there would be at least one lunch spent eating Kaiserschmarn. Ok, if I am honest about 95% of days we would be eating these sweet, messy, scrambled and yet oh-so-fluffy pancakes. These feelings – sitting on a wood bench in a cottage,  still half way wrapped up in your warm ski clothes – powdered sugar everywhere – a crunchy crust with fluffyness underneath – getting the last bits of the applesauce – all these happy feelings I felt again, as I tried my own version of this recipe in Frankfurt.

You want a very fluffy consistency of the pancake here and for that two things are important: sparkling water and very stiff egg whites. When you are adding the egg whites to your dough, start out with 1/3 of their volume. Fold these in until you see no more white specks. Because the dough is now already a bit fluffier, the rest of the egg whites can be folded in more easily.

This is now added to a pan with melted butter and you let the bottom brown with a closed lid on top. My dough rose a little bit during that time and through that stuck to my lid. When I then lifted it, I also pulled up the entire Kaiserschmarn! I burst out in laughter and suddenly it came loose and fell back – but sadly not perfectly into the pan, but also a bit next to it. I’m lucky that one cuts it up in the end anyways and no one could notice.

And that’s also why you shouldn’t worry about turning it over. If you are tearing it up in the end anyways, it also does not need to stay in one piece during the turning. So to turn, cut the Kaiserschmarn in two halves. Put one on a plate (with the brown side down obviously) and now you’ve got enough space to turn the other one. And then turn the halve from the plate into the pan as well.

If you would like an especially crunchy crust, add a bit of powdered sugar over the Kaiserschmarn in the pan once you tore it up. Let this caramelize for a little while and then serve dusted with more powdered sugar. For us two the portion was enough for a big lunch, but it would also be enough for 4 as a dessert.

Separate the 4 eggs and beat the egg whites stiff with an added pinch of salt.

In a second bowl mix well the egg yolks, 30 g of sugar, vanilla sugar, 300 ml milk and 125 g of flour. Then add the 75 ml of sparkling water and the stiff egg whites (regard the note above).

In a big coated pan (28 cm circumference) melt the butter and then add the dough. Now add a lid and allow the mass to set on low heat.

Once the bottom is a light brown turn the pancake over. For this, preferably cut it up in two halves. Let one half slip on a plate. Now turn the other half in the pan and add the one from the plate again.

We served it with applesauce and caramelized hazelnuts.
But it would probably also be great with plums, cherry compute or raisins stirred into the dough