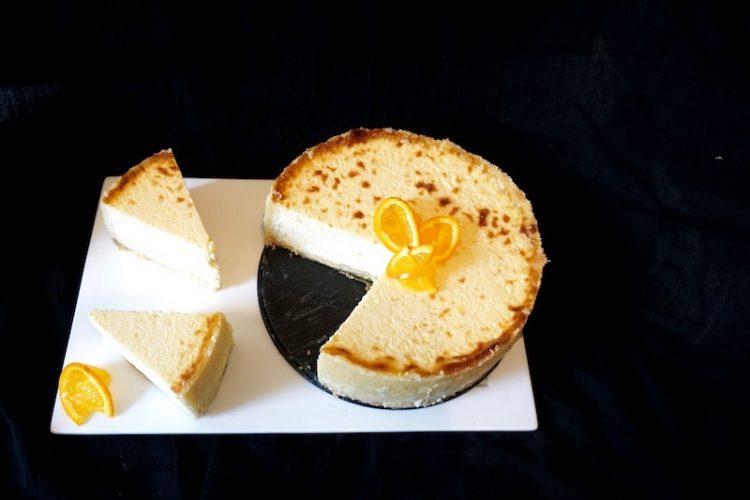 My one and only favorite sister lives right now near New York. And I have the privilege right of visiting her! And it is also her birthday today! I am so happy that I get to spend this day with you in New York. And what would be better fitting than a classical New York cheesecake as your birthday cake.

Sadly, I am not able to make the name-giving and rather involved cheesecake here for her (instead we baked a really tasty apple cake – her favorite anyway). But A and I tested it intensely before my trip and decided it is definitely birthday-worthy. So all the best to you little sister!

Cheesecake in Germany is a very different affair than in the States. Though it is also made with cheese in it, it is a special kind called “Quark”. Which is denser and more tart than cream cheese. So a German cheesecake turns out not as soft and more fluffy. But a NY Cheesecake is creamy and more a praline filling in cake form.

But sadly this indulgences is a little bit elaborate in the making. And if I, who finds for example making her own pasta personally not really elaborate, call something elaborate, then you got some work in front of you.

But we can get through this together. The cake is baked in a water bath. And the temperature needs to be changed 3 times during baking. And then you let it cool for X minutes, before taking it out of the form and cutting it, and letting it cool again. I would plan an entire afternoon for this cake where every 30 minutes a little task needs to be done for the cake. And don’t forget the long cooling period of 9 hours before cutting into it the first time. So yes, elaborate.

But it is so worth it! I love the taste of a cheesecake. The mascarpone melts in your mouth. The bottom is crumbly, sugary. And the filling taste slightly tart and of oranges. Just stick to the recipe (word for word) and you will be rewarded with a beautiful and tasty cheesecake. Place a baking paper on the bottom of a round pan (9 inch diameter) with a removable side. Grease the pan.

Place 1/3 of the dough on the bottom of the pan and push it down evenly in a circle. Now run a knife along the sides of the pan and remove the side of your pan.

Now place the bottom part of the cake on your baking rack and bake it for 10 minutes at 400° F (200° C, upper- and lower heat), until the bottom crust takes on a light gold-brown.

Meanwhile whip together the filling. In a mixing bowl whip 400 g plain cream cheese, 250 g mascarpone, 20 g flour and 100 g sugar until it has a consistent creamy texture. Then add the zest of 2 oranges and 1 lemon, as well as the juice of 1 orange and 1/2 lemon. One after the other mix in the 3 eggs. You want a filling with no clumps in it while being rather liquidy. So it is important to mix in the liquid ingredients one after the other, stirring very well in between each addition.

Now add the side to your baking pan again. Press the remaining crust dough evenly on the side up to the top.

Next, we need to waterproof the pan, so that we can bake the cake in a water bath. For that take 2 sheets of aluminium foil. Place them in a cross-form and set the pan in the middle. Now wrap the foil up around the bottom and sides of the pan. Be careful to make it as tight as possible and to leave no gaps or holes up to a height of at least 2/3 of the pan.

Now place the wrapped pan in a casserole dish. Add enough water, so that it stands to a height of 2/3 of the side of the pan, but cannot leak into the pan.

Fill the round pan up with your filling and place the casserole dish with the cake in it in the oven.

After that turn off the oven (without opening it) and let the cake stand in the oven with a closed door for another 30 minutes.

Now open the oven and let the cake cool another 30 minutes with the door opened (so it is away from drafts, preventing cracks).

Then take out the round pan and dry it off. Place the pan on a cooling rack. Run a knife carefully between the sides of the pan and the crust to loosen it from the pan (otherwise it might stick to the pan, causing the cakes surface to crack as it cools). But do not open or remove the side of your pan yet.

Let the cake cool another 30 minutes on the rack.

Then place it uncovered in its pan in the fridge (covering a warm cake causes moisture to condense on the lid, which could drip on the surface making it thus less pretty) for 3 hours until it is completely cool.

Now you can cover the cheesecake and continue cooling it for another 9 hours or longer.

Finally the time has come. Run a knife between the sides of the pan and the crust once more and remove the side of the pan. The cheesecake can be cut best with a knife, that has been held under running water between each cut.

Does not keep longer than 3 days in the fridge.