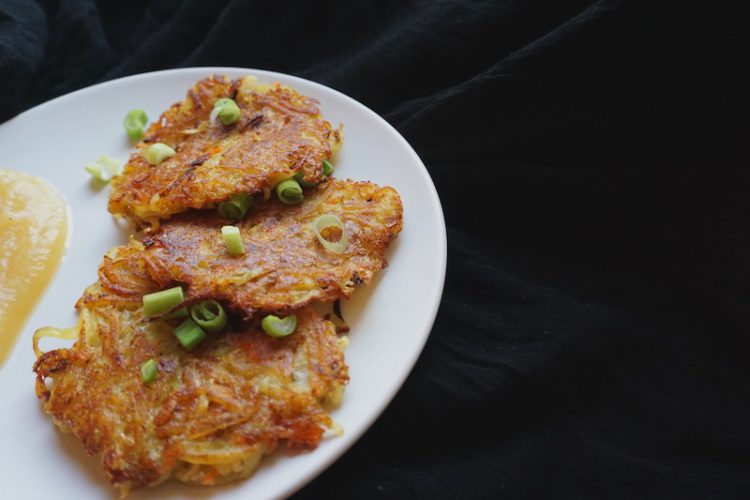 My boyfriend A loves “Reibekuchen” – these are pancakes made out of grated potatoes that are normally fried in lots of oil. And they can be found traditionally at Christmas markets and fairs served with some applesauce. I would always shy away from making them at home as I didn’t want to grate a huge amount of potatoes. And then having to fry stuff? The smell of oil and all the splatter, no I don’t really need that in my tiny kitchen.

But a new addition to my kitchen appliances is a food processor that helps with the grating. So one excuse down. The grating didn’t even take a minute. But instead the frying took the rest of an hour. Because these are made with relatively little oil and on a lower temperature it takes about 10 minutes until one pan of them is finished. As the potatoes are not pre-boiled you should really give them the time to cook.

Peel 500 g potatoes, 100 g white onion and 50 g carrots and grate them using a food processor or a grater.

Over the sink take a fistful of the grated vegetables into your hands and squeeze out all juice. Do this to the entire bowl of vegetables. Get rid of as much of the extra liquid as possible.

Whisk up one egg and stir it into the vegetable. Then add 1 tbsp flour, 1 tsp salt, 1/2 tsp pepper and caraway. This will not form a solid dough but more a loose mass.

In a pan on high temperature heat just enough of the vegetable oil to barely cover the bottom. The oil has the right temperature, when a small drop of dough sizzles immediately after dropping it in. Now, with a tablespoon set small amounts of the dough into the pan and push them flat.

Fry the Reibekuchen on one side until it turns a light brown (about 5 minutes, if that happens too fast turn down the heat accordingly). Then turn them over and fry them on the other side until this one is brown as well (another 5 minutes).

Pad off excess oil on kitchen paper towels and store them on a plate in your oven turned to 70° C (160° F) until the other batches are finished as well.

Taste best fresh, but will also keep up to 2 days covered well in the fridge.

We ate them with applesauce.